The NCAC mission is to promote cultural activities emphasizing music, art, literature, drama, and dance by and for the citizens of Noblesville, to enhance the overall quality of life of the entire community. 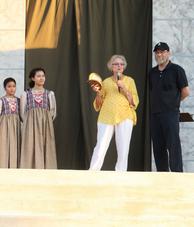 ​​SHAKESPEARE IN THE PARK

We regret to announce that the Band Concert Festival scheduled for Sunday, August 9th has been cancelled. The safety of the band members, volunteers and audience is our number one priority. We plan to reschedule for a future date.

THE HISTORY OF THE NCAC
The Noblesville Cultural Arts Commission was created by Mayor Mary Sue Rowland in September of 1992.  Under the direction of Jane Campbell, the commission organized the first event in May of 1993.  Law Day was a program that used theater to teach children about the courtroom process through fairy tales.  July of 1993 saw the first Shakespeare in the Park production - A Midsummer Night’s Dream.  That first year also saw poetry readings, art displays, and band concerts in Seminary Park. For nearly a decade, the commission sponsored the Summer Art Fair on the Square. As the arts culture in Noblesville has evolved, the commission has evolved with it. Noblesville has a new Arts District Designation and NCAC plays a vital role.